For the fourth time with her personal toilet slave, Bubblebut made her slave eat her diarrhea with napkins. She obliged him to suck, lick, eat and swallow her diarrhea from napkins and ingest them. Very kinky and bizarre domme.

At this point, the woman continues pooping and by the time she is finished, it results in a massive mound of poop! She then urinates to empty her bladder as well before flushing everything down and allowing the third lady to take over! As usual, she lifts up her skirt, pulls down her panties, and then begins defecating! This time, she releases one massive chunk after another and by the time she is finished, she has created a huge mound of poop! She then follows it with urinating before flushing everything down!

Sweet Mistress Isabella deliciously guides you to become her human toilet, I am in a dressing gown, totally naked, with deklle 12 heel mules and I have a nice shit egg ready for you! With good manners you get everything !!!!!

The schoolgirl enters the toilet complete with her bag and uniform! Without further ado, she pulls down her panties and then squats on top of the toilet to begin defecating! She takes her time doing so! After releasing one massive chunk of poop, she pushes out a couple more until she completely exhausts her rectum! By then, she urinates and then flushes everything down, allowing the second lady to have her turn! She lifts up her skirt, pulls down her panties, and then begins pooping into the toilet! She releases one stream after another, taking her time doing so!

I wouldnÂt ever leave you out! I bought an ASMR mic, and I thought it was simply wild how it picked up even the sounds inside my belly, loud bubbly, gurgles, pops and all the belly movement. Today I was struck with a bout of Diarrhea. I felt now is the time to let you hear it all. My belly had been grumbling aching and I needed to get this out. I shit so viscously, I sprayed my seat and inner toilet. ItÂs wrecked. I have a mess, and shit dripping down the inner walls of the toilet, close up and a flush that canÂt even crack the filth I expressed into the toilet. Double flush and itÂs still dripping brown shit. Afterwards, my tummy is adjusting to the loss, and I share a few moments of uninterrupted stomach rolling. I prepared 40 minutes of condensed footage into 3minutes of ONLY the stomach sounds. You will note I do so in many many positions, sitting laying down etc. ASMR mic right up against my aching belly just churning and rolling bubbles caught wonderfully clear on the mic.

Time to get with it, itÂs been a bit now and you need your dessert. Certainly a thick chocolate pudding or maybe a mousse. This is wet, soft warm and diarrhea dinners need to clean this up! ItÂs time. I will expose my sweet sexy ass in nude sheer pantyhose, but my wet shit is to impatient. I barely get a moment to show you how sexy I am before my volcanic ass erupts for you. I must have been excited. Oh what doozy itÂs so messy, I will need a thorough licking. I share upclose and demanding areas of needed tonguing. My thighs are caked in it, it drips down my calves and even into my toes. You have alot of work to do. Savor it, and leave your sweet salty spit behind. My pubs are soaked slathered in wet sludgy diarrhea, and I need a man who can handle a heavy load. 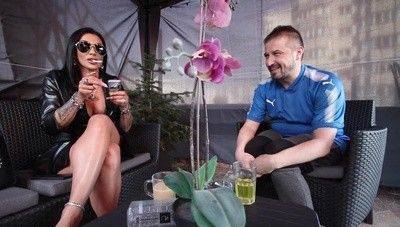 In this public toilet stall, a schoolgirl enters and is then fast to pull down her panties and squat to begin relieving herself! She takes her time pushing out a massive poop out of her asshole which she then later follows with a series of chunks! By the time she is finished, she has created a huge mound of poop and she then urinates to finish it all off! A different woman then takes her place to do the same thing! She lifts up her skirt, pulls down her panties, and then begins defecating! She takes her time pushing out streams of slender feces! When she could no longer release any more, she urinates and then flushes everything down, allowing the third woman to have the opportunity to do the same thing! As usual, she squats on top of the toilet and begins pooping, this time, she is releasing one massive chunk after another, resulting in a huge mound of feces inside the toilet! She takes her time doing so, resulting in a lot of poop in the end! She then follows it with peeing and by the time she is finished with that as well, she flushes it all down!

Today, I had to shit a really big load Â. But I took it into the bedroom and laid me on the bed with my legs apart .... It feels so cool when I smear the warm shit on my cunt and bodyÂ. I use my fingers to prepare my cunt and my asshole before I fuck my hot holes deep and hard with my very big rubber cockÂ. My lust is real. Check out how I love the games with my shit ...

For the third time with her personal toilet slave, Bubblebut made her slave drink his own urine and be her toilet, making him swallow her piss and eat her shit from a cup. Then at the end she made him clean the bathroom.

Bananas are rich in vitamin B6 .... But only with shit does it result in a full meal .... Actually, I wanted to shove the breakfast banana into my hot asshole, but that didn't work. And so I just shit a big fat poop sausage on the banana and then ate it with my shit. I enjoy every bite ... it's great to chew the shit in your mouth and then swallow it ...

You are probably wondering what I do for days, so here are a few of my days from the toilet life, you can imagine that you are spying on me in the toilet and enjoy

Posted on: 2016/06/13
Keywords: Shitting, Shitting Clips, Scat, Scat Clips, Playback, You are probably wondering wh, so here are a few of my days, you can imagine that you are

ENGLISH SPEAKINGWhen I use my slaves as a toilet, I do shit right in their mouth; unfortunately this has a disadvantage: I can't get my ass cleaned up with their tongue, since now it is all dirty with shit. Today, however, I will use another method with my female slave: I will shit on her chest, so that her tongue remains clean and I can use her as toilet paper for me, cleaning up my dirty little hole. Of course, that doesn't mean she won't have to eat my shit afterwards; when the cleaning work is complete, I'll put all the shit in her mouth and she'll have to eat everything.You may also like this clip: EATING FROM TWO MISTRESSESYou find it here: https://www.yezzclips.com/store_view.php?id=572&item=138809

I wear high heels. I take off my shoes and start to shit right in them. I put on my shoes. shit gets out. it's nice. my feet are all in shit. then I shit into my shoes again. I'm kicking shit again. I like to play with shit with my feet 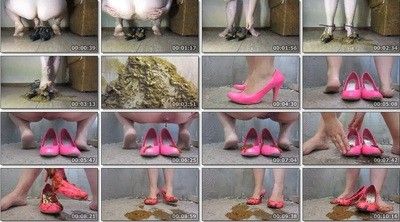