All alone at home, this woman finds herself bored. In her effort to find something to do, what comes into mind is quenching her dirty fetish! She lays a couple of diapers on the floor and then begins defecating on them! She pushes them out slowly as she takes her time doing so, resulting in long slender streams of uninterrupted feces! She creates a massive mound when she is finished! She then wipes her asshole clean before taking her time observing the filth that she has created to her heartÂs content! However, this is not the only situation that she does it! In another time when she finds herself all alone, she proceeds to do the same thing again! She lays a couple of tissue on the floor and then poops on it, only this time, she releases smaller chunks! When she is finished, she concentrates her attention on grabbing her filth and sniffing them to her heartÂs content!

POV:you cooked me a meal. The main course was delicious but unfortunately you burnt the dessert. Which is a shame for you because now you must be punished. I will show you how to make a delicious pudding and then you must eat up every mouthful to redeem yourself. What could I have in mind?!I lift my dress, remove my knickers and poop into a container. I then slice some twinkies in half and spread my soft poop into the centres. I put a lollipop up my asshole, make it all shitty for you and add that to the treats. There you go my darling! Eat up every mouthful and show your mistress how grateful you are to her for making you dessert!

Watch as I put a very special, delectable parcel of goodies together for someone. First I stuff some worn cotton panties into my pussy to make them extra fragrant and moist. Next I do a giant soft scoop poop into a Tupperware container. THEN I fill a bottle with my pee!! Yum! Breakfast is served honey! Bon appetit!

We had a few drinks that night to be able to relax, and my ass understood that it was to relax too, after a while I wanted to poop, Mike was happy because he hadn't had dinner yet, so my bathroom was connected to the bed and I positioned myself in on top of him, it didn't take long and there was a huge load in the mouth of my bathroom, so he started eating my poop, his heart was racing, his lips were trembling and his dick was like a stone, his adrenaline was at its peak, the pleasure of Mike was visible, tears were streaming from his eyes and then he was eating and I was helping to put more food in his mouth, he just couldn't eat the rest because he was drunk, and then he came to tell me how delicious dinner was.

After I found out that my husband-slave toilet fetishist, that he likes to spy on me in the toilet as I shit and piss, I allowed him to sometimes spy on me, even specially started to film for him as I shit. But for him this is not enough, he still sneaks after me, but now he is not afraid of punishment that I will catch him, because I allowed this. Yes, I allowed, but not constantly. And now I have a dilemma, to punish not to punish. But I am his Mistress and I do not need a reason for his punishment, so in the next few days I'll moral lower him below the toilet bowl to the full and You will see it

This is an amazing video. My slave stays horny for a long time with my shit and piss in his mouth. He really wants to taste those delicacies and being under my ass drives him crazy! There are several shots to show the action well, to show me and its being a toilet. The video starts with the slave sniffing my ass and loving my belly full of his meal. Then I make him lick my panties with a strip of shit. Until I shit and piss in his mouth. He masturbates all the time and I like this reaction, a sign of the strong desire to serve me. It will be me with my hands to make him enjoy as a reward for being a fantastic latrine.

Inside her home, this woman is just minding her own business when her peace is suddenly disturbed by the appearance of an unexpected visitor! Before she could do anything, he grabs her, strips off her clothes, and then wraps her with rope, rendering her completely helpless! By then, the culprit no longer wastes any more time and begins serving his dick inside her mouth, leaving her with no choice but to perform a blowjob! It doesnÂt take long though before he gets enough of it and concentrates his attention on squeezing her pair of massive tits, causing her to repeatedly lactate! She is later drenched with her very own milk! Eventually, the guy proceeds with fucking her right in the pussy, but he would also fuck her tits and repeatedly serve his dick inside her mouth throughout the entire duration! As he gets more aggressive, he later thrusts his cock inside her asshole, fucking her anally fast and hard to the best of his capabilities! From being laid on her back, she is later bent over and fucked doggystyle! Eventually, the guy pulls out and it is immediately accompanied by a strong stream of feces! Apparently, the woman felt the uncontrollable urge to defecate and it just keeps on going! She even urinates along with it! However, that doesnÂt stop the man who only continues anally fucking her, consequently creating a much bigger mess! By the time he is finally contented and pulls out again, the lady releases another surge of poop!

here are a few parts. I'm lying in the bathroom right in the toilet. IÂm also lying on the floor and itÂs a big pile of crap. I also lie on a chair. and stomping my big ass in the shit. my body is getting dirty and smelly. 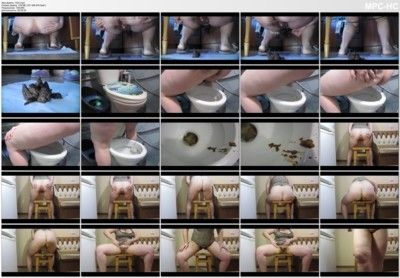 ITALIAN SPEAKINGCUSTOM REQUEST - The video should start with a few words to my friend Isabel (something like Hi Isabel. Today this whore will suffer for our pleasure, I wish you a very hot orgasm ....- the slave is standing and you whips her back, cradle and thighs;- from there you can provoke her with the dirty underwear of the Goddess in her face, etc etc etc before starting the scat in the slave's mouth; the Goddess must show pleasure while filling the slave's mouth (ie prove sexually aroused beyond sadistic pleasure);- finish with the slave licking the beautiful ass of the Goddess until it is clean. ****** the slave to say that she likes to suffer for the pleasure of my friend Isabel;After all this, the Goddess will greet Isabel wishing to meet her someday.The main ingredient is you: your incredible sensuality of gestures, supreme elegance in movements and lust in the beautiful voice.TAKE A LOOK TO MY FEMDOM CLIPS TOO. You find the here: https://www.yezzclips.com/store_view.php?id=1726FOR COMMENT, SUGGESTIONS, CUSTOM REQUESTS, write me at mistressgaia@live.it

ITALIAN SPEAKINGCUSTOM REQUEST - The video should start with a few words to my friend Isabel (something like Hi Isabel. Today this whore will suffer for our pleasure, I wish you a very hot orgasm ....- the slave is standing and you whips her back, cradle and thighs;- from there you can provoke her with the dirty underwear of the Goddess in her face, etc etc etc before starting the scat in the slave's mouth; the Goddess must show pleasure while filling the slave's mouth (ie prove sexually aroused beyond sadistic pleasure);- finish with the slave licking the beautiful ass of the Goddess until it is clean. ****** the slave to say that she likes to suffer for the pleasure of my friend Isabel;After all this, the Goddess will greet Isabel wishing to meet her someday.The main ingredient is you: your incredible sensuality of gestures, supreme elegance in movements and lust in the beautiful voice.TAKE A LOOK TO MY FEMDOM CLIPS TOO. You find the here: https://www.yezzclips.com/store_view.php?id=1726FOR COMMENT, SUGGESTIONS, CUSTOM REQUESTS, write me at mistressgaia@live.it

The woman continues smearing her feces all over her partnerÂs body and by the time she gets contented with her work, the two proceed to change roles! The other lies down on her back and gets defecated and then smeared with feces all over her body! By the time she gets satisfied with her work, the two concentrate their attention with intimately kissing one another while caressing their hands all over their bodies, resulting in a much bigger mess! As they get more aroused, they later couldnÂt help but put a chunk of poop in between their mouths and then chew and eat to the best of their capabilities until nothing is left! By then, they continue intimately kissing until their heartÂs content!

Another epic movie with Mistress Anita, the most wanted gypsy scat domme in Romania. Today she quickly called her slave because she wanted to start filming with him again, also wanting to have fun like in the old days. She tied his cock and balls and began to verbally humiliate him and make fun of him while she smoked a cigarette and drank some******. She started beating him, hitting him with her fists and feet, being wearing high leather boots, with heels. Then she ordered him to put on her strapon because she wants to break his ass and make him shit nonstop with the hole widened to the maximum! She fucked him badly in the ass and then simply announced that he would have to become her human toilet again, because she can't help but go to the toilet again and she wants to use only human toilets every day in her whole life! The slave complied and reached below the Mistress, his mouth wide open waiting for her peeings in his throat. Miss Anita gave him a drink, obliged him to swallow mouth after mouth, almost 1 liter of piss. She told him to use his mouth and tongue to lick her lips and clitoris and to clean them if he wanted to have the main course: diarrhea! In a few seconds the slave felt his mouth widen and begin to fill with perfect diarrhea and began to chew and swallow the divine shit of his mistress The mistress made him film himself eating and swallowing and told him that she did not have much time available and that it would be good to eat everything if he wanted to be called again at main meal. Excellent clip with the best scat lady in Romania.

This time you get two of us, really playing ass first in our poop. Anna has a wetter soft poop, and Abby has a bit of a harder time dropping her two logs. Once all our shit is released on our wooden chair. We sit smoosh and sway our asses all over it, butt bumping. Once lifted we ass to ass smoosh and smear. Bumping and sliding on each other. Playful flirty moans. We sit in it many times swaying around getting it all over our asses. We play ass fight a little bit for space on our messy chair. We give a nice long close up of each ass, some twerking, plopping back into the chair. Of course you get nice and close while we quietly lift and drop so you can hear the shit sputter and pop. Lifted with pussy exposed showing our hardy pussy mess. Ending with double sitting again and some more grinding it in the our asses.