Follow me while I visit and use one of the first toilets I began experimenting with the scat fetish over five years ago. My old porcelain toilet was happy to see my sexy ass and receive all of my shit again! First I pee and poop in the dirty toilet. I visit my old porcelain toilet again after itâs cleaned to feed it some more of my sexy waste.

Now I know how .... Look for yourself what I mean: :) close-up at the end, including, pee I had afterwards, you are allowed to look at another video like ;-)) The ass siehste as well

Today is Valentine's day and because im not that kind of woman who like to celebrate it candles and flowers, in a romantic way:)) SO I did it in my way, I wear Harley Quinn costume and i star having some dirty fun:D In this video you will see Harley Quinn shitting in her pants, making a big mess and smearing the poop all over her sexy ass, mmm she loves playing with her shitty ass, she loves showing u her shitty, dirty ass, its makes her very very horny and thats why she starts fucking her asshole. mmm THIS Is more fun than 100 Valentine's DaysEnjoy!

Today you will see my girlfriend and her first experience with shit.It was nice to see how she indulges passion with the shit and how she is gentle and attentive.She has absolutely no resistance to shit, she was just great and beautiful lick my pussy and ass.Her shit tasted like a delicacy, it was a great party.I hope you will enjoy this spontaneous film.

66862 - Backpackers Got Lost and Desperately Needs to Shit!

They were walking around town when they made a wrong turn and got lost. By nightfall, they have to take shelter in a strange house that seems empty. Unable to use a bathroom all throughout the day, they are more than ready to unload the shit they've been holding on to for hours. So they squat on the strange bathroom to piss and scat away their tiredness.

I trained to toilet slave. I go to the bathroom, and you begins to caress my legs. I lit a cigarette and using your mouth as an ashtray. Sit there and watch me in the toilet. Now lie down on the floor and open your mouth wider. I'm shitting there.

recorded on her old Iphone Two years ago she was unable to retrieve until now! A great stash of clips From my favorite Redbone BBW!! These are some great lost gems!!! If you enjoy loud explosive dumps, great grunting and straining, and facial expressions, Francesca is among the best!! OH the expressions!!! Her faces perfectly match the painful explosions shooting out her ass!! Probably only Ms D is a more demonstrative dumper!!! Watching Francescaâs faces as she pushes out her FUNKY wet farts and loads is one of my personal favorite pleasures!!! Francesca I know on a personal level more than ANY other FUNKY lady as she and I used to date prior to the startup of my site. So Itâs nothing like watching a girl youâve been with also drop a load!! Sheâs one of the three models on LKIF I literally know âtheyâre shit stinksâ â because Iâve been in the bathroom after it!!! It wasnât until a year after I started the site did she finally relent to being recorded. Hell she never let me watch her take a dump while we dated even!! But after smelling what she was unloading, I can understand why!! lolI can literally still smell and feel my nose burning and eyes watering after walking in the bathroom behind one of her post mexican dinner loads!! While she has done adult films, taken it up the ass and had facials on film, she was sooo embarassed at first at the concept of shitting on camera!! But once she got comfortable she of course was a natural and you can genuinely tell she sometimes forgot she was even filming so the dumps are authentic, not staged.These are some great intimate dumps. Enjoy a great lost âHot 16â. Some sceneâs are a little dark due to the lighting in the bathroom, but the audio on these clips are pricless!! As is her commentary!! In the funniest scene enjoy as she talks about what she needs to increase her âpooping powerâ shits or something like that, but is embarrased to have to go while at school. Enjoy her lost plops, farts and convos!!

I stopped at the gas station for a quick dinner of greasy fried chicken that I had been craving. I needed to smell my dirty cummy pussy and go to the bathroom before going home to eat my dinner. Enjoy watching and listening to my sexy bathroom sounds while the gas station workers wonder what is taking me so long to come out of the bathroom and pick up my food.

I'm always shitting in the slave's mouth. You will see close-up how shit out of my ass and falls into the slave's mouth. The whole bathroom in my shit. This dirty pig likes to lick me clean after toilet. Kiss my asshole and lick clean all by your tongue. Do you want anymore? Then you have to serve for your Mistress. You are my toilet and slave, which is necessary for my comfort.

This hotel guest had certainly presented differently! The dominant ladies show him where his place is. On the floor in the toilet! He is extremely humiliated and abused as a toilet. Feet and soles of shoes is only the beginning. Everyone shits and pisses him into his mouth. An absolutely merciless scat torture...

All three parts of a three part series!Watch my fill these plain white panties with a mountain of shit! I push out one nice big, load of poop in them and then the next day I push out another! The second load is so massive that it rips my asshole open! My poor little hole even starts to bleed! My poor little shithole canât handle such a gigantic load!I panties are so full of shit now! Look at that amazing bulge! I love reaching my hand back there and feeling all that shit! Watch me pull my panties up into my ass crack and get my shit smeared all over! It feels amazing to have my panties packed full of shit!My panties are filled with so much shit! I know I need to push out another load soon! I can tell because I have started farting like crazy! This farts are nasty! All I can smell is the days old shit in my panties and the new fart smell mixing with it! I am really enjoying pushing out these load, smelly farts into my dirty, shit filled panties! Look at the huge bulge of shit in these disgusting panties!Listen to me let fart after fart rip out of my ass! Some of these farts are so loud! They feel amazing coming out of my ass! I am such a dirty fart lover!My panties are filled with shit! Look at that huge bugle of poop! I pull my panties down and show you all the shit! Check out that massive brick of my shit!Iâve got another load of poop in my ass! Iâm going to dig it out! Watch me finger fuck my shithole as I push and push a big smelly load of poop right out of my ass! I love finger fucking my hole! And I love digging my warm poop out! Iâve got shit all over my juicy ass! I feel like such a dirty shit lover!Enjoy!

Part 3 - These mean girls picked on new girls in the campus. Anyone they feel tormenting they do it! The new girls gets humiliated in front of other girls being pushed around, beat up, undressed and to add up to the humiliation these mean girls has fetish for piss and shit! They specially likes the new girls poop! So they extracted it off the new girls 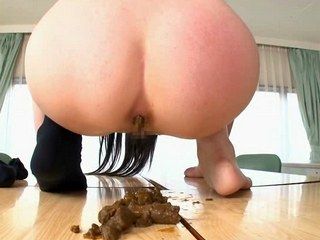 Do you really like the taste of my shit? I have not shitting since yesterday. Open your mouth wider and swallow my creamy shit. Lick my ass, only lick, don't touch. Oh, look at this. Your mouth full of my shit. What a nice toilet.

Part 3 - These mean girls picked on new girls in the campus. Anyone they feel tormenting they do it! The new girls gets humiliated in front of other girls being pushed around, beat up, undressed and to add up to the humiliation these mean girls has fetish for piss and shit! They specially likes the new girls poop! So they extracted it off the new girls

Im in the kitchen wearing just an apron and preparing some food. In the same time i need so bad to shit, really really bad and i can't keep it anymore. I take a shit on my floor kitchen while im still cooking and i grab my toy (i always keep a toy close to me when im home and when i know that i will need to shit) and fuck my dirty asshole, smearing the shit all over my ass. I continue to smear my poo all over my body, boobs, neck and i smear a lot on my face. I put a big load of shit all over my face, a big load of soft shit. This is the most extreme face smearing video i made till now! Enjoy!

This new girl is thrilled to be invited to the sleepover of the hottest girls in college. Little did she know that the got something in store for her! They switch the web cam on and the older girls coax her to take off her clothes and face the camera naked! The girls display her perky tits and make her bend over so that everyone can see her smooth asshole!

73142 - Autumn Poops, Pees and PROLAPSES at the Movies

Hi fellas, yesterday I was on my way into the movie theater to see the new Underworld film and stopped for a quick pee and then oopsie realized i had to poopsie!!! LOL Anyway I figured I would share my quick adventure with you and give you a fun lil POV video. In this clip you really get to see a glimpse of my gaping cunt and prolapsed shit hole! Enjoy!! 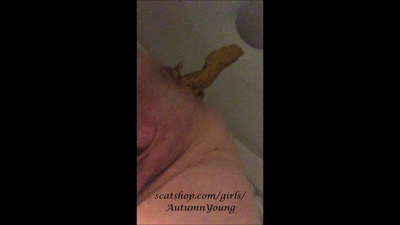