ItÂs strange times we live in indeed, but Lisa Marie has been making the most of it!! Enjoy as she returns with Two Outdoors clips. Now that folks are staying in more, it has allowed Lisa Marie to get some public clips she wouldnÂt normally be able to. In the first, she was doing a little exercise in the park when she got the urge to pee. Looks like she pushed to far, as a little bit of the bubblies shot out her ass by mistake!! In the Second, It was like she was walking in a barren wasteland. She sneaks off into the woods, and makes like a bear! Enjoy Two public FUNKY clips from one of the sexiest asses in the game!!

Finding it lonely inside her apartment, this woman decides to spend her time on the rooftop where she then gets a little bit aroused and begins playing with herself! Squatting on the ground, the first thing she does is ****** herself to defecate on the floor! She manages to release some, but that isnÂt enough to content her! So, what she does next is give herself an enema, ****** everything inside her rectum out! The result is a massive squirt of both wet and solid poop spread all over the ground!

A schoolgirl and her boyfriend are taking a walk along the beach side and they later find a man who is in the middle of his sleep. With no one else around, the couple decides to take advantage of him! What the woman does is take her panties off and then urinate and defecate on the victimÂs face, consequently drenching him with piss and covering him with poop!

With the woman completely restrained, the culprit starts pulling his dick out of his pants! Then, without further ado, he serves it into the helpless womanÂs mouth, leaving her with no choice but to suck to the best of her capabilities to keep her captor happy!

A couple wants to try something new, so a man quenches his fetish for poop! Since it is a dirty act, they do not do it in the premise of their home, but instead outdoors! What they do is make their way to the nearest forest! When they are sure that nobody is around, the guy proceeds to lift up the sweetheartÂs skirt and give her an enema! After which, he follows it with an air enema to further trigger her rectum! When he is done doing so, she immediately starts releasing gas! It doesnÂt take long before she follows it with a mixture of solid and liquid feces! She just keeps on squirting one stream after another, only being able to stop when her rectum is rendered completely empty!

A woman is no her way to work when suddenly she is grabbed from the sidewalk! There are two culprits and what they do is lift up her skirt and then penetrate what seems to be a syringe into her asshole! Not long after, they make a run for it! At first, she doesnÂt understand what they did to her, but she later realizes that they gave her an enema! This caused her to desperately look for a toilet to relieve her rumbling rectum, but with none in sight, she decides to settle for a secluded area! There, she takes off her panties and then squats on the ground where she releases all that she can! By the end of it, she leaves a massive pile of feces!

While on the road, this woman feels the desperate need to relieve herself especially that they are still far from their destination. So she has her driver stop at a secluded and dark area at the side of the road and does her best to not get caught while she takes off her lower garments! Immediately right after, she releases a strong stream of piss on the ground! It took some time to stop, but she is not yet done! She proceeds to squat a little bit higher from the floor and then releases a slender line of feces!

98242 - Desperate Ladies Peeing and Pooping Outside the Hotel!

Two ladies arrive at their hotel and are told that their rooms arenÂt yet ready so they still have to wait. However, they really need to take a piss and dump! So what they do is leave the establishment, find an empty area with no people, and relieve themselves! Immediately, the two ladies release a strong stream of urine which they then follow with wet feces! After creating a huge pile of poop, they clothe themselves and leave as if nothing unusual just happened!

Zelda is back With Three Great clips she did while on her last vacation of the summer. Enjoy in the 1st clip as she does a great outdoor clip. She shoes Bears are the only ones that take HUGE shits in the woods!! Then enjoy as she props the camera behind the toilet to show the logs coming out behind in the second two clips. Another great 3 pack of clips from Zelda!!

She really has to go shit and she doesn't care if the whole neighborhood sees her! She picks a spot near a corner house and takes out her wet napkins! She takes off her panties and squats on the grass and then pushes out a mound of wet and sticky poop. She wipes herself with her napkins, puts on her panties, and walks off, leaving her shit on the grass for everyone to see.

Right in the middle of the worst traffic ever when her stomach starts grumbling loudly, soon accompanied with sharp pains in her abdomen. She has to shit and she has to shit NOW! So she has no choice but to take another path leading out of the city and pulls over the side of the road. Clad only in her bikini, she sits on the grass and shits on the grass, sticky clumps crawling out of her bikini bottom.

What's worse than getting your period during a fine day at the beach? It's having to look desperately for a place to shit because you're about to burst in your underpants! These chicks have got it real bad. One had to take a dump right there on the beach. Another shitted right in the swimming pool, her scat floating around her. The last one had it so bad she wasn't able to wait for her turn in the bathroom and had to scat right in the living room.

I'm feeling naughty today and decide to risk it and take a shit on my balcony in broad day light and with all kinds of traffic and people going by...Anyway I stand by the railing and spread my cheeks and pooping. As the first turd comes out, a bumble bee flies outta no where and scares the shit outta me! Hahahaha! I keep shitting though...and after I'm done I dip my toes into it and show it for the camera...don't you wish you could lick them clean!

I know the snow is on the way it is only 25 degrees. My ass is cold in my lace panties and my mini skirt and thigh high tube socks shit it?s cold outside. My ass was cold but my shit was so hot you can see the steam coming off it. It was so much shit in my white lace panties, it wouldn?t all fit shit was everywhere. I can?t wait to shit in the snow for you freekz :)

Abigail Dupree is such a naughty little girl. She has put on her bright white tights and is waiting for her boyfriend to show up because he has the key to the house. She's stuck outside after eating beets for two days straight without a shit and she just cant help but to finish off her beets from lunch. She has been craving beets this entire week. She loves how it makes her poop red. She pops a squat in the yard while she waits and lets a big red turd fill up her pristine tights. It smushes all over her pierced pussy and in between her cheeks. She then takes her tights off and fills her ass with water to clean out her butt in preparation for her boyfriends arrival. She sqirts red poopy water in an impressive launch out of her tiny butt hole. Her boyfriend pulls up and she scurries off to clean up before he catches her being naughty.

Bonnie is truely one with nature. ENjoy as she wanders into the wilderness of her own backyard to find sweet relief!! Enjoy as she fingers her ass to push out a constipated little turd while also peeing as well. She even got a little in her panties!! Another funky clip from my original Funky White Girl!!

Francesca is back once again with another delicious outdoor adventure!! Enjoy as she "waters" the grass in one clip and then comes back in the second with some of her Juicy Human Fertilzer!! Damn that ass was looking so phat and juicy in this clip!! and boy were some monsters coming out of it!! Francesca once again is back with another great outdoor clip!! Wonder if she plans on growing apples with the "apples" that fell out her ass? lol only time will tell!!

Bears apparently aren't the only ones that do you know what in the woods after all!!! Enjoy as Bonnie enjoys a nice Smoke in park While sitting in what looks like a lawn chair - only that "lawn chair" is a Porta Potty!! Watch as Bonnie unsuspectingly Drops the Biggest Log I have yet to see on this site - Had to be at least 12 Inches!

I turn on the camera, then place it on the ground and adjust it. I wave and smile, then turn around lifting my dress to expose my ass and thong. I move my thong to the side and pull out a very dirty butt plug, putting it into a baggy and off to the side. I then take a good shit on the ground, pissing a bit as well. I turn and pick up the camera, giving you a better view of the shit before waving goodbye. (quiet and full of nature sounds) 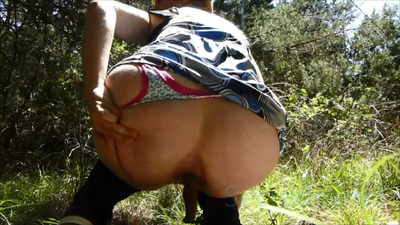